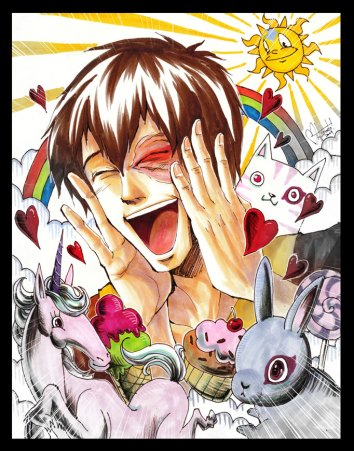 Had a reasonably fun Japanese lesson; some sort of stereotypically cute Japanese trainee teacher taught us… I didn’t understand a word she said but she was nice to look at (looking back at this comment I realise that, combined with the fact that I’m doing an essay about lesbianism, I must appear inclined that way..) Anyway, it was fun let’s leave it at that.

Got an hour before Japanese Modern History (BANE OF MY EXISTENCE!) but now that that awful exam is over I can go back to not paying any attention which will undoubtedly lead to failing again next time. The joy.

I managed to write another post for Lingualift about Yayoi Kusama, she’s awesome, let’s all just look at how awesome she is:

She’s in her 80s, living in a mental institution (voluntarily) likes painting polka dots and is collaborating with Marc Jacobs for Loius Vuitton. Oh, she also likes to get people naked and cover them in polka dots…

Hopefully the post will be up on Lingualift soon because quite frankly, I’m not gonna repeat myself when I’ve already written a whole article about her!

I also watched another crrrazy Japanese film last night ‘Apartment 1303’. Verdict: Don’t watch it, but DO read my review (which I haven’t actually started yet… Sorry Marcello, you will have it by the end of the week!)

I was well into researching Japanese history when this absolutely mad girl comes BARGING into the computer room, slams all of her stuff all over the desks and starts ranting in some foreign dialect, completely putting me off!?? Rage!

Luckily I’d already done quite a bit of work for my presentation, which I’m very kindly going to share with you now!

Firstly I’ve done a bit about Japan’s Twenty-one Demands to China in 1915. So, the rest of the world was so preoccupied with WWI that Japan took advantage and got aggressive all over China, demanding certain privileges, knowing that nobody was around to bail them out.  (I ramble on about this for a few pages!)

Next comes Japan’s Peace Preservation Law of 1925. They basically denied about 200,000 people the right to vote with a little loophole, and then, to stop people having a response to this awful bill they enacted a law saying that people basically didn’t have the right to oppose the political party in ANY WAY – very George Orwell/Totalitarianism.

And last, but by no means least, the March 1st Movement in 1919 where Korea decided they’d had enough of Japan’s crap, drew themselves up a Declaration of Independence and then strolled though the cities in protest, wanting to be independent of Japan.

It all looks a lot more impressive that this… So, I’m in need of help please, what do these 3 factors have in common? I need a little summary 🙂

Beautiful Obento and the role of the Japanese woman

Done absolutely loads of work today! Mostly reading on the gender roles of women in Japan. There was one part in particular about Bento boxes and how the more pleasing to the eye they are, the better mother you are? If you gave your child a tuna sandwich and a packet of crisp the school would probably drag your sorry backside into school for a meeting about the child’s welfare. So let’s have a look at some beautiful Obento… 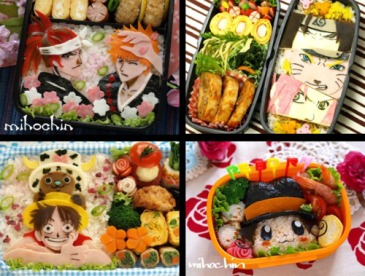 How good do they look? They look like they would take about 14 hours to make, how do these women have time for housework? Unfortunately, my western indoctrination doesn’t really allow me to see the nice point of view in women’s subordination. I mean, I totally agree that different sexes are good at different things (women nurture and men go to war!) We have different roles and although I’m all for equal rights and what not, sometimes we have to just sit down and think about what our gender says about us, our instincts as men or women and what we know about each sex. HOWEVER I would like to stress that although I think different sexes suit different roles, I DON’T think that one role is more important than the other!!! The world needs men to go out and fight, hunt and build for our survival, but it needs women to raise future fighters/hunters/builders and to look after her husband and their home so that he has anything to even fight/hunt/build for, without the emotional, nurturing and logical support that a woman provides, men wouldn’t be able to do all of those manly tasks that they are so proud of… and vice versa.

Eat that men of the world. 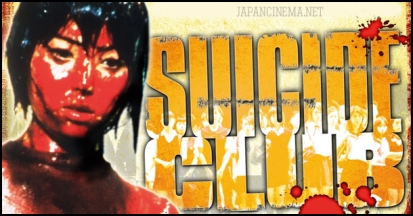 Not the most pleasant picture I’ve featured, but hey, we all need a bit of shock from time to time! Click the picture and read my review on Suicide Club. I’m sure most of you will have seen it, it is quite grim but definitely worth the watch. I should also mention that suicide is a real issue in Japan, the movie and its review are for entertainment purposes (I received a comment on the review… which you will see if you read it!)

If Marcello reads this THANK YOU! You really cheered me up 🙂 I’ve been having a pretty stressful week, too much work, too little time etc. So now I’m gonna do some reading for my next lecture and write a little report on a documentary called Dream Girls which is about the Takarazuka Revue. It’s slightly odd for western women to imagine that women in other parts of the world have the view that the girls in this film do. I don’t think I fully understand Japanese women and why they feel subordinate to men… do they even feel like this? That’s the impression I got from watching the documentary. IOf you have seen it let me know what you think.